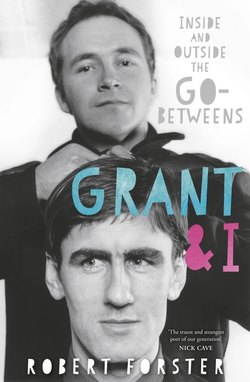 In Grant and I, writer and musician, Robert Forster provides fascinating stories of life with the Go Betweens, the Brisbane band which he and Grant McLennan formed in the 1970s. Forster’s use of language is exquisite as he traces aspects of his childhood from late 1950s Brisbane: a secure family life and education at a local primary school and Brisbane Grammar School and then teaming up at Queensland University drama school with Grant. Hailing from country Queensland, McLennan had also had been at a boys’ school (Church of England Grammar School – “Churchie”). His life took a different path, with his independence possibly gained from his long time at boarding school (from the age of six after the death of his father).

Grant’s bohemian lifestyle in a Toowong share house contrasted with Robert’s life in leafy The Gap. But they worked well together, pooled their talents, took music seriously and magically weaved poetry and stories of everyday life into lyrics. Their halcyon days of partying, socialising, drinking, smoking and playing music, also encompassed genteel activities such as enjoying Earl Grey tea and scones with jam and cream.

Grant’s Spring Hill apartment/“bohemian paradise” with its ambience reminiscent of a film set fit for the likes of Robert Mitchum served the two friends well as they beavered away writing poems, a film script or novel.

The group’s many songs are well known: Karin, Lee Remick, Cattle and Cane and Streets Of Your Town being some. And from the group’s formation (1977) until its 1989 break-up, various musicians and singers came and went – all mentioned in the book.

Robert has painted vivid pictures of their disappointments, successes, people and personalities, Who’s Who in the music industry and many aspects of life creating music, their lives often laid bare with stories of excess drinking, emotional upsets and drug taking. Their quest for success took the group to other places including Sydney and Melbourne, and England, Scotland, France, Germany and the United States. Life overseas could be harsh: the mundanity for Robert as a filing clerk in a London hospital; living in shabby parts of London; Grant’s “dreary apartment” near eerie Council estates and “piss-stained” lifts. Robert’s descriptions of Brisbane are very apt: “[Brisbane is] a kinda Memphis, a muddy, sweaty, rock’n’roll town with weatherboard houses, floods, a heavy cop presence, and people with eight tonnes of junk in their yard.” And, Paddington’s [Brisbane] “antique-store bohemianism” contrasts with Highgate Hill’s funky tightly-packed housing and broader ethnic mix, while The Valley is said to be “one of the scariest places on earth”.

The book details the group’s break-up and Grant and Robert reforming a band in 1995. But it ends on a very sad note with Grant’s sudden death in 2006, just as he was to celebrate his 48th birthday.