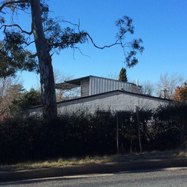 Located in leafy Forrest (11 Tasmania Circle), Manning Clark House was the long-time home of the late Australian historian, Professor Manning Clark and his wife, Dymphna (a linguist) and their large family.

Surrounded by a large garden and designed in 1952 by architect, Robin Boyd, MCH nowadays plays host to a wide variety of functions such as book launches, conferences and seminars. For information see: http://www.manningclark.org.au