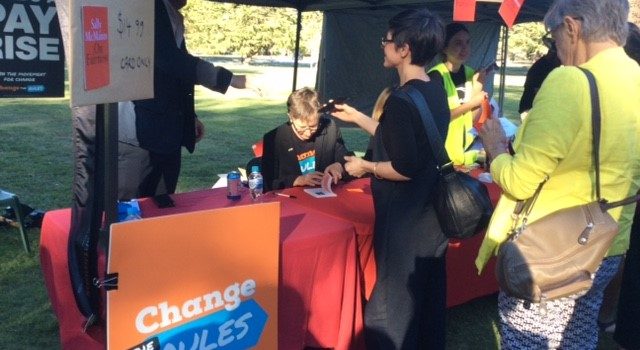 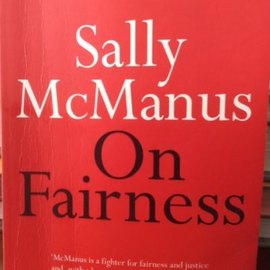 Australian Council of Trade Unions (ACTU) Secretary, Sally McManus’s book, On Fairness, was launched in Canberra by welfare advocate, Dr John Falzon, and Sally outlined the work and achievements of the ACTU and union movement, and acknowledged earlier generations of Australians in securing the employment and social programs enjoyed today. On Fairness packs in information and facts and figures about many topics: Australian union history and activities, workers’ rights, exploitative employers, unjust laws and industrial frameworks, union achievements for workers and the community, digressing at times with stories about similar situations in other countries.

While no doubt familiar with the tough world of union politics (including as a Secretary of the Australian Services Union), McManus faced a baptism of fire only hours into the top job. Appearing on the ABC’s 7.30 Report, Sally told Leigh Sales that she would break an industrial law if it was unjust, a comment which was later used against her and attracted considerable flak from many conservatives. She is obviously not fazed or surprised by a conservative backlash: “…it seems that generating anti-union media stories is a KPI for the Coalition government”, she noted, saying that unjust laws have had to be broken to win worker rights and conditions, and that over the years, workers taking strike action have often confronted many forms of state-sanctioned punishments, including clashes with the police. Noting that Australia has the “most restrictive anti-strike laws in the developed world”, her book also reminds that the International Labour Organization has deemed the right to strike as a human right.

Securing fairer situations for workers is integral to Sally’s work and in travelling around Australia she hears the concerns of people of all ages and walks of life: increasing instances of insecure work options; exploitation of young workers; and, unfair events such as when a factory’s entire workforce is sacked, and re-contracted in different forms, at much lower pay rates. This of course contrasts sharply with huge remunerations and “golden handshakes” for company bosses and retiring executives.

The book includes examples of union achievements such as the 1970s refusal by Sydney construction workers to bulldoze heritage buildings, wreck low-income housing or tear up bushland, as part of the then NSW Builders Labourers’ Federation Secretary, Jack Mundey’s, “green bans”. McManus applauds former Prime Minister, Paul Keating’s radical reforms and remaking of the Australian economy in “a neoliberal framework”, while retaining investment in expansive social programs, infrastructure and services, and working with unions to extend and deliver initiatives such as compulsory superannuation for workers. She questioned the effectiveness of the current government’s push towards “trickle down” economic policies, citing a 2018 Business Council of Australia survey which showed that a large majority of businesses would not use any windfalls to raise wages or create new jobs.   On Fairness is easy-to-read, and contains significant information which would interest people wanting to learn more, or refresh their memories, about the work of Australian unions. Sally McManus acknowledges other unionists who have mentored and supported her, especially Michael Flinn, as well as Tas Bull, Tom McDonald, Teresa Conrow and Cathy Bloch. She has also acknowledged the editorial assistance of Vanessa Badham.

A peaceful stay in Huskisson