Are Robots Taking Over Our Work? 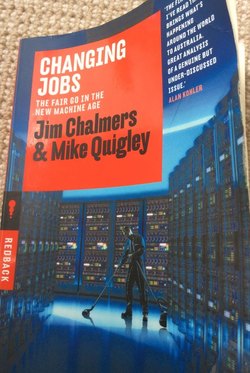 “Social research group McCrindle worked out that, on current trends, a school-leaver in 2014 would have 17 different employers and five completely different careers in their lifetime…this phenomenon is likely to speed up as jobs are replaced, displaced and augmented by technology”, say Jim Chalmers and Mike Quigley, quoting McCrindle from 18 June 2014, “Job Mobility in Australia”, The McCrindle Blog.
In Changing Jobs: The Fair Go in the New Machine Age, Jim Chalmers (federal Labor MP and Shadow Minister for Finance) and Mike Quigley (adjunct professor at the School of Technology and Communications at UTS and former long-time global telecommunications company executive), canvass myriad factors related to emerging technologies and possibilities of robots displacing workers in various sectors.

The authors consider jobs which are likely to be affected by robots and ways to ensure that artificial intelligence and technology do not create further inequality. As Chalmers noted in a recent Canberra Times article, they have pitched 33 ideas for how our schools, policies and mindsets need to change if Australia is to best prepare for the changes to come. They have selected 20 recommendations which they believe are worth considering.

Some advice includes: ensuring one can adapt to change; learning new skills and undertaking further education and training; taking advantage of technology for new jobs; learning languages; attending drama classes (to help perform at job interviews); and even learning to grow vegetables. The importance of ensuring meaningful lives for people without work is noted.

Labour linking (across different countries); assessments of a Universal Basic Income (UBI) in Australia (including in relation to its targeted welfare system, transitions to work and capacity to help people with disabilities into work); a robot tax; and the need to determine future jobs – are some of the issues discussed.

Denmark’s “flexicurity” model which helps retrain workers in the face of mass job losses is discussed: “The Danish government insists that a ‘golden triangle’ of policies work together: generous unemployment benefits; massive investments in jobs, education, training or career guidance for the unemployed; and more flexible rules for hiring and firing during the peaks and troughs of the business cycle”. Similarly, Singapore’s Skills Future which anticipates and trains people for likely new jobs is seen as worthwhile.

Jim Chalmers and Mike Quigley raise the issue of casual and contract work, noting that such workers miss out on sick and holiday leave and the other entitlements given to permanent staff. They outline how portability of entitlements across jobs and sectors could reduce disadvantage for casual workers.

The book is a great read, packed with information and references to other sources including international studies about the possibilities of robots and their impact on work as we know it.