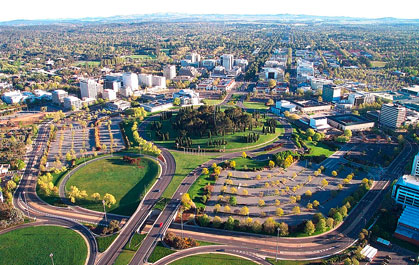 Canberra is a unique city, built more in a hurry post 1950 than incrementally which perhaps happened with other Australian cities.

Canberra does not a CBD similar to other Australian cities with their tightly-packed historical buildings. It does not have the wall-to-wall funky shops of Melbourne’s Brunswick or Coburg with their eclectic mix of nationalities, cultures, apparel and foods, Sydney’s glamorous beaches and harbourside attractions, Brisbane’s warm climate and riverside life or other attractions unique to other Australian cities.

Federal government cutbacks nowadays result in less jobs so Canberra is hardly an obvious place for young people to migrate to. And despite its picture of orderliness and rosy image, Canberra has its fair share of hardships and social problems.

But with a population of less than 400,000 people and a mix of country-town appeal and sophistication, Canberra’s many attributes such as its national and local institutions, art galleries, embassies, great schools, green open space, sports fields, good restaurants and film and theatre scene, along with easy access to such places, make it a great place to live. Apart from formal education processes, everyday life in Canberra alone offers learning opportunities as one gets to meet interesting and informed people via the many activities, events and public lectures on offer.

Not surprisingly, planning matters are important to Canberrans. It can be disappointing to see the loss of good architecture from earlier times. Former ACT Chief Minister, Jon Stanhope has made the point (“Why the Northbourne flats have to stay”, CityNews, April 2-15, 2015), that while the flats are not what everyone finds attractive, architectually appealing or of any apparent value, that does not diminish their inherent heritage significance.

The flats have been an extremely important part of Canberra’s public housing development post World War II and their design and location were the NCDC’s way of illustrating what a modern and innovative city Canberra was intended to be.

Opportunities could flow from the preservation-restoration of some of structures such as showcasing some of Canberra’s earlier designs; acting as an educational resource for architecture and other students; and commemorating NCDC’s work in developing Canberra. Just as the old, stark-looking buildings of places such as Berlin are part of a city’s charm, a sensibly-revitalised Northbourne flats precinct be a tourist attraction. Canberra is ideally placed to showcase innovative architecture and design, yet many buildings which replace older ones are not always imaginative.