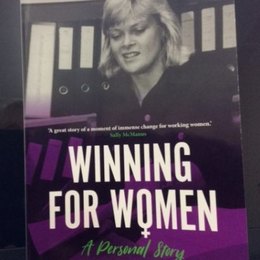 Speaking recently with ANU historian, Christine Wallace, one of the founders of the Women’s Electoral Lobby (WEL) in Australia, Iola Mathews, shared her experiences of the heady days of second-wave feminism which saw immense changes at home and work for Australian women. A one-time journalist with The Age, in 1984 Iola was recruited by then  Australian Council of Trade Unions’ (ACTU) President, Bill Kelty, to help bring women’s issues into the mainstream under the Prices and Incomes Accord between the ACTU and the newly-elected Hawke-Keating government. The Accord focused on maintaining moderate wage claims in exchange for the restoration of a universal health insurance scheme and some other benefits. Iola was at the forefront of advocacy for women workers through her negotiations with the government and other parties. In outlining the contributions of the many people who worked to achieve workplace reform for women, Iola’s list includes Joan Kirner (a school teacher, advocate and later, a Premier of Victoria), Beatrice Faust (founding member of WEL), and Jan Marsh (ACTU advocate). She speaks highly of Bill Kelty, describing him as “one of the unsung heroes of the women’s movement”. Much of Iola’s busy personal and professional life is laid out in her book, Winning for Women: A Personal Story: growing up in Melbourne; gaining university qualifications; living overseas; securing a cadetship with The Age where she was a court reporter and education writer; working on campaigns and arbitration cases to assist women workers; experiences of sexist behaviour towards women. In outlining the experiences which led her to becoming an advocate for women, she is frank. In 1972, she married Race Mathews, a widower with three children, who was then an adviser to Gough Whitlam. Race later became a federal member of parliament (1972-1975) in the Whitlam government, and a minister in the Victorian parliament during the time of Premier, John Cain.

Iola and Race had two more children hence their hectic lives became even busier. While she enjoyed life in the heady world of politics, her career often took a back seat. Race’s electoral and parliamentary commitments, academic studies and role in the Fabian Society meant that she carried a significant load on the home front and she frankly describes her ups and downs including being sidelined at The Age, and feeling isolated in suburban Croydon.

She missed out on employment at times when having to defer to John Cain’s wishes. He did not want the wives of his Ministers to work in positions (for example in the public service), which could be construed as nepotism, or might be seen as not appropriate by everyday people who earned much less than parliamentarians. While Iola admired Cain’s integrity, she considered it unfair when he blocked some of her employment opportunities. But she undertook some paid work, and volunteered on social welfare and community committees and boards and taskforces for education, employment, health and housing projects to assist women. Her work included writing a publication to improve the media’s reporting of education stories, formulating strategies to eliminate discrimination against women in sporting clubs, and freelance pieces on many subjects.

At the ACTU, she worked on test cases in industrial courts including for adoption leave, parental leave, maternity leave, equal pay, fairer pay and conditions for nurses and outworkers, superannuation, and ways to grade clerical workers in line with their skill sets. Often speaking at conferences, at various times overseas she saw the additional difficulties faced by advocates from other countries who had to deal with military dictatorships, or, multinational companies moving in where governments guaranteed low wages (and no unions to assist workers).

Extensive discussion in the book centres on the background and effect of principles such as “comparable worth”, “equal pay for equal work”, and “equal pay for work of equal value”, including in relation to the mid-1980s protracted strike action of Victorian nurses which included action to bring nurses’ pay and conditions into line with their qualifications when their training had moved to tertiary institutions, and new technology made their jobs more specialised. In that chapter, detailed information is provided about disagreements between the Victorian government and the nurses’ unions; walkouts by nurses; logs of claims; empty hospital wards; hostility towards nurses and other parties; escalating strike action; and negotiations and breakthroughs among various parties including the Arbitration Commission, unions, ACTU and government.

Given her work and personal experiences, it is not surprising that Iola notes that for women to compete on an equal footing in the workplace, men need to share child care and domestic work.