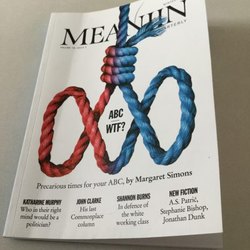 Canberrans and others who’ve ever worked for parliamentarians will not be surprised at journalist Katharine Murphy’s recent article about the stresses and strains on politicians (and their staff) in modern-day politics.

By the time he left politics, Greg Combet was seriously in need of proper sleep, medical assistance and exercise. Along with gruelling parliamentary, portfolio, electoral, caucus, Cabinet and government responsibilities, his work life was overlaid with difficulties from ongoing leadership instability within his party. In his final parliamentary year, he averaged two days per month at home.

Along with a hectic parliamentary schedule, Dr Washer often provided medical assistance to colleagues and saw “too much fatigue and depression” attributable to long and arduous sitting days and commitments, exacerbated by the loss of “sanctuary” and “tranquility” in the party room because of leadership disputes.

Richard Di Natale says that “toughest thing in this job by a million miles is being away from my kids and my wife and obviously the long hours”. But he found the challenges easier to face after he’d had a break, rather than at the end of back-to-back 80-hour sitting weeks.

Now a bookshop proprietor in Victoria’s Queenscliff, Mat Jose worked for Kevin Rudd and Julia Gillard when Australian politics was increasingly manic for many reasons including the rise of “campaign” journalism. Explaining the difficulties that Rudd and Gillard faced, nowadays Mat enjoys “not having to answer the phone at 5am” to set up a radio or TV interview.

With the benefit of hindsight, some solutions to the occupational stresses are put forward. Richard Di Natale wants to encourage wider community representation so that members would identify more with ordinary Australians. Mal Washer sees a need to address major parties’ “tribal” pre-selection and institutional processes which are “trumping” community representation. Greg Combet outlines the possible merits of recruiting external appointees so that parliamentarians could shift their energies from extensive parliamentary and electoral duties to policy work.  ‘The Political Life Is No Life At All’, Meanjin, Winter 2017.