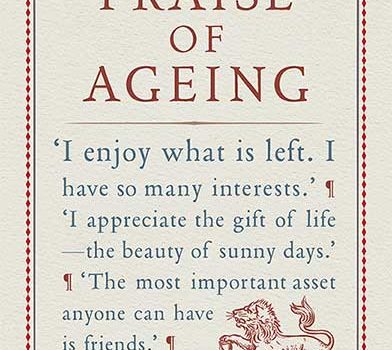 In her book, In Praise of Ageing, In Praise of Ageing [Text Publishing, Melbourne, 2013], writer, sociologist, educator, researcher, policy analyst and one-time Director of the Australian Children’s Television Foundation, Patricia Edgar, has documented interesting stories about older Australians who have overcome many adversities and emotional and physical difficulties and lived fulfilling and productive lives. Their stories about raising children, dealing with the death of loved ones and being on one’s own, are lessons for us all.

Ms Edgar notes that the age of 65 years is too young to retire and that older people are wanting to stay in the workforce to boost their savings and remain active.

But she laments the many negative messages towards older people from some sections of the medical profession who seem to want to cull 70+ age groups from receiving regular “expensive” procedures. And she says, Treasury and other organisations seem obsessed with focusing on our ageing society’s “costs” despite that Australia’s expenditure on health services is not unreasonable for a developed country and studies of actual health costs show that ageing is a minor part of medical cost increases in Australia and internationally. Ms Edgar notes that GDP fails to measure the significant dollar value of the caring, creative, community and voluntary work of older Australians, citing figures that: “Those over 55 contribute the staggering sum of $74.5 billion a year through caring for spouses and grandchildren and in other unpaid voluntary work. Women aged 65 to 74 contributed $16 billion in unpaid work inside and outside the home; men of that age, who are fewer in number, contributed another $10.3 billion.”

The lessons from these inspirational people include the importance for older people of staying fit, being involved in various activities and having something to look forward to. But many people may not have the financial means to support good health and enjoyable lifestyles in their older years, so being able to stay in the paid workforce is important in boosting their retirement incomes. But realistically, employers will not necessarily employ anyone aged over 60 and some workplaces discriminate against older workers. Indigenous people and those from migrant backgrounds experience drawbacks including social isolation and the inability to access health and medical services and people in rural and remote areas face additional difficulties related to natural disasters, lack of transport and fluctuating incomes.

More positively, Dr Ruth Williams, a research fellow with National Seniors on the Productive Ageing Centre noted recently in the Sydney Morning Herald: “…some mature age-friendly agencies are now popping up…[and] we are also seeing more employers, especially taking on older workers because they recognise that it makes good business sense for their staff to reflect their customer base.” http://www.smh.com.au/business/promoting-agefriendly-workplaces-20150508-1myp06.html

Perhaps also resonating with Ms Edgar’s thesis are reports that baby boomers are taking to university study in unprecedented numbers [as a recent Weekend Australian feature (28-29 March 2015)] has shown. As well, given the importance of social networks for older people, it is reassuring that technology is assisting older Australians with study, work and maintaining contact with their families, friends and the community.