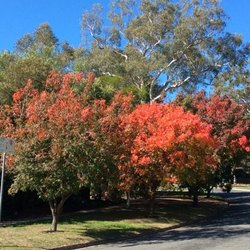 Canberra is renowned for its magnificent autumn colours. This year is no exception and whether in the older parts of the city or the newer outlying suburbs, nature seems to be having its way.

Clare Sibthorpe noted recently in The Canberra Times, that the National Arboretum boasts vivid autumn colours and textures. She reminded us that institutions and botanical gardens are not the only places to see a “burst of golden goodness”.

It’s little wonder that many visitors come to the capital to see the autumn colours.

Among favourite places for a spectacle are the red Chinese pistache colour of Red Hill’s Friendship Street. Clare Sibthorpe noted other places: Ebden Street, Ainslie, with its fabulous autumn colours of pin oaks, and Grant Crescent, Griffith, which boasts an amazing canopy of American elm.

Many other parts are renowned for their colours: around Lake Burley Griffin, the Australian National University, Acton, Braddon, Belconnen suburbs, and suburbs in Canberra’s south, including Deakin, Yarralumla and Woden, and further afield in Weston Creek and Tuggeranong. And that’s just to name a few places.

In his recent column in Canberra City News, gardening expert, Cedric Bryant, reminisced on earlier days when each Canberra suburb had its own works depot with “dedicated staff” taking great pride in making their suburb “the best looking”. But he also reminded that now – autumn – is the time to get started with planting our trees and shrubs.