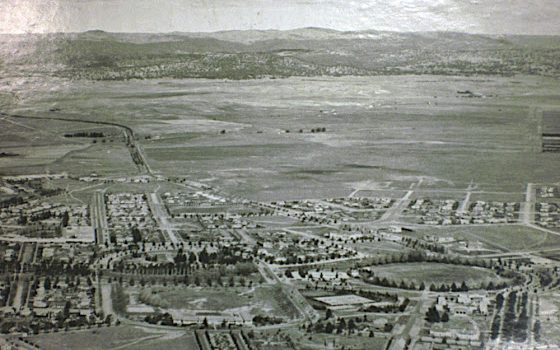 When Australia’s provisional parliament house was opened in 1927 in Canberra, by all accounts the ceremony took place in empty paddocks amid scenes of grazing sheep and dogs sniffing at dignitaries’ legs. Over the years, the city’s growth patterns fluctuated and during the 1930s Depression and World War II eras, building and other activities slowed down considerably. Writing in The Canberra Times (“A Life in corridors of power”, March 2013), Doug Anthony, a former Deputy Prime Minister, Leader of the Country (National) Party and Minister for the Interior (who visited the capital a lot during the 1930s with his parliamentarian father), recalled that Canberra of the time had very little here.

But by the 1940s and early 1950s, Labor’s Ben Chifley and the Liberals’ Robert Menzies, followed by other Prime Ministers and their governments, supported Canberra’s development as the national capital. The 1957 establishment of the National Capital Development Commission (NCDC) marked the start of the high rates of recruitment of public servants to Canberra which were to continue until the mid-1970s.

In the late 1960s, the city still had a small country town atmosphere. Many young people arrived from across Australia to work in the Commonwealth public service. The federal government which then had responsibility for Canberra, was generous. Incentives such as access to government housing (via a waiting list) and rental assistance through the Reg 97 subsidy, assisted young couples to buy a government house. People could register to rent or buy a government house or rent a flat. Living-away-from-home allowances, baby crèches, good schools and community facilities and even the allocation of free shrubs for suburban gardens, were among the “perks”.

Hostels were a feature of Canberra life and places such as the Hotel Acton catered largely for married people. Young singles often spent their first months or even years in hostels where nightly parties, corridor barbecues, cricket and card games were de rigueur. The quality of the hostels ranged from old, cold, dilapidated Reid House or Mulwala House to others such as Gorman, Narellan, Barton and Lawley Houses and the fairly new Gowrie (now Fenner Hall).

A sense of enthusiasm pervaded this small town comprised of what are now the inner suburbs (other parts of Canberra such as those featuring the “mandatory” mission brown – were yet to be built). Civic, Kingston and Manuka were the main shopping areas. Unlike more-established CBDs with older, close-together buildings, a lot of Canberra’s structures sat in wide-open green spaces, such as the cubist, 1960s Northbourne Flats, designed by nationally-renowned architect, Sydney Ancher. Gracious old homes dotted parts of Northbourne Avenue on the city’s edge and to a lesser extent, Barry Drive.

Designed by renowned architect, Enrico Taglietti and built in 1961, the Townhouse Motor Inn and its restaurant, the Noah’s Ark, had a modern appeal, as did Braddon’s Canberra Rex Hotel with the distinctly-1960s decorative brickwork. Somehow these modern low-slung buildings blended well with quaint structures such as the old Canberra Club building and wooden police station in Civic.

For a newcomer the city held many contrasts. Aesthetically the modern buildings seemed fitting of Canberra’s status as the national capital yet the older wooden buildings had down-to-earth appeal, contrasts which were mirrored socially. The very nature of a small place with lots of ex-pats invariably brought people from many backgrounds and walks of life together. Whether public servants, academics, students, tradesmen, embassy staff, retail assistants, hairdressers, artists, musicians or theatrical types, they happily mingled at the many, often impromptu, social gatherings. Irrespective of whose party it was, it seemed that just about everyone in town was invited (or was there anyway).

While lacking big-city entertainment and nightclubs, there was always something for young people to do: Saturday afternoon jazz at the Dickson Hotel, films and parties, picnicking at the Cotter Reserve, skiing in nearby ski fields and socialising in the Canberra Rex’s bars or the Dugout Bar or beer garden at the circa 1927 Ainslie Rex (now the Mercure). Departmental balls including some in the Monaro Mall’s (Canberra Centre) empty thoroughfares were fun – guests dancing to the music of some of Canberra’s renowned bands – despite that ball dresses, alcohol and escalators aren’t always a good mix, especially in the dim light of candles in wine bottles.

A popular Friday-night drinking spot, the Hotel Wellington “the Wello” (now Rydges Capital Hill) attracted people of various ages and backgrounds, especially regulars from the parliamentary press gallery. While the ambience of the Civic Hotel (opened in the mid 1930s and demolished in 1985) wasn’t to everyone’s tastes, it was popular, especially in summer when patrons would drink outside on the wide steps facing Alinga Street.

One soon learnt about the nuances of the bureaucracy, including the higher echelons which were dominated by men (and still are to a large extent), many of whom had experienced the Great Depression and the War, which seemingly instilled in them a deep sense of helping those most in need. One also learnt of a department’s social mores. At the 1968 Treasury Department’s Christmas party, the music blared and the booze flowed, but Treasurer Billy McMahon was too polite to let on if he noticed the giggling teenagers nudging him (no security then).