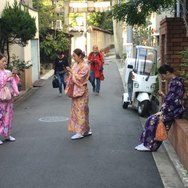 A holiday in Japan provides experiences of history, culture, people, natural and urban geography, architecture, food and way of life which contrast markedly with that of Australia. Rather than staying in hotels, a better way to experience “everyday living” may be Airbnb accommodation. Apartments are small, have tiny kitchens and compact laundry/bathroom facilities and little space for entertaining, but generally have all that a tourist needs. And buying a JR Rail Pass in Australia prior to travel, can be the key to using Japan’s rail system of local trains and the very efficient, fast and comfortable Shinkansen (bullet trains) which connect Japan’s major cities. Working out how and when to activate the JR Pass and booking seats in advance are important, but JR office staff are very helpful. Like many visitors to Japan, our first train experience was from Narita Airport to central Tokyo where we boarded a Shinkansen and were soon speeding past tightly-packed apartment blocks, houses and other dwellings including traditional Nagaya-style wooden or post-and-beam houses and western-style apartments, in what seemed a melding of brown-grey buildings, footpaths, walls, and sheds, punctuated at times by tunnels, blue-green mountains and occasional rice fields. Shinkansen travel is massively fast, but the ride is smooth. 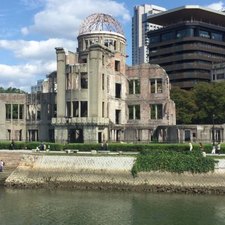 Trying to memorise station names along the way seemed a fun way to practise Japanese, but was not so useful with the white-gloved taxi driver who took us to our first apartment in a dark, almost foreboding-looking Hiroshima laneway (which looked more reassuring in the morning). One is struck by Hiroshima Peace Park’s beauty and tranquillity, our thoughts turning to the bombing of the city during World War II, and the cruelty and futility of war. A stylish cafe in a swish arcade served us cold, not hot, tea – thanks to some language difficulties. Not to worry, this first-world problem was later addressed in the Hondori shopping precinct by, of all cafes, Starbucks – which was a great spot for some people watching in the nearby square. Hondori included a large bedazzling shopping arcade, a sight with which one becomes familiar in Japan, but the Kyoto and Tokyo versions dwarfed those of Hiroshima. 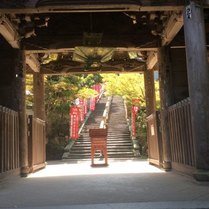 Drink vending machines and Lawsons and 7-Eleven supermarkets (for instant meals such as Bento boxes), dot the streets and laneways in this and other cities. And the sight of people taking their pampered pooches for “walks” in prams became familiar, human devotion to dogs only rivalled perhaps by love for cats (for their good luck), dating back to the Edo era (1603-1868) when Tokyo was known as Edo. Tourist buses provide a snapshot of the city, but the nearby picturesque World Heritage-listed, Miyajima Island, is also a “must see”. Accessed by train and a short ferry ride from Miajimaguchi Village, the island offers various attractions including shrines, temples, gift shops, eateries and opportunities to mingle with friendly deer. 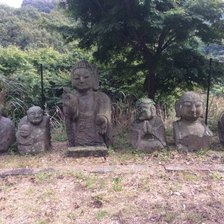 After some days in Hiroshima, a four-day Walk Japan tour of the Kunisaki Peninsula beckoned, so we boarded the Shinkansen bound for Fukuoka’s Hakata Station to meet the guide, Hiromi, and our walking companions, who as it turned out, were great company and provided plenty of laughs. Usa (considered the gateway to Kunisaki Peninsula), gave us our first taste of rural Japan. Despite that fallen-down bamboo trees, muddy tracks and disturbed flora interrupted paths after a recent cyclone, the walk was not strenuous. Traditional Japanese food was served at all meals, such as natto (fermented soybeans) for breakfast, ramen (often for lunch), mochi, seaweed, fish and chawanmushi (steamed, savoury custard), and miso soup. 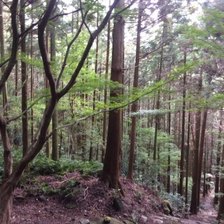 Visits to many shrines, temples and monuments gave Horomi the chance to impart valuable information and stories about Japanese culture, history and Buddhism and Shintoism. Our first stay in a ryokan (traditional Japanese inn) was at Yamaga, and soon we were familiar with soaking in an onsen (hot spring baths), feasting on Japanese meals, using chopsticks, wearing kimonos, shuffling around quietly in slippers and sleeping on futons. Day one’s walking of many steep hills included visits to Buddhist and Shinto temples. A highlight was seeing the ancient Kumano Magaibutsa Budda stone carvings and a chance meeting in a peaceful bushland setting for a “chat” and photo opportunity with a vibrant and engaging 80-year-old Japanese woman. Nights two and three were spent in a ryokan run by three generations including the patriarch (a local priest) and his son (a renowned chef). But it was the patriarch’s wife who cooked our wonderful meals! 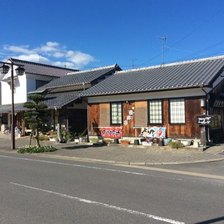 One day featured climbing up more steep hills, including to a small temple, Itsutsu-ji Fido, where we needed to tightly grip a chain set in rocks to avoid failing, the quid pro quo being the magnificent panorama, and later, we saw what is said to be the biggest temple of its kind in Japan. Walk Japan prides itself on offering authentic Japanese experiences, so visiting a family farm provided insights into traditional rural life. We met another bubbly 80-year-old woman, who served us dumplings, rice cakes and tea in her home. Later in the village, Kitsuki, we had lessons in Japanese tea making, visited a small brewery and saw lots of young Japanese women in traditional costumes for a day of celebration. Our last dinner (a feast really), was at a “western-style” ryokan in touristy Fukuin, served at a traditional (low) table – not ideal for middle-aged arthritis sufferers. 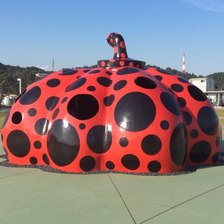 Naoshima was the next port of call, a modest island known for its galleries, art projects and quirky public art. It’s a peaceful place for an escape from big-city hustle, and Benesse House and the Chichu art museum are among its attractions. Among the island’s many artworks is that (pictured) by well-known Japanese contemporary artist, Yayoi Kusama, just near the island’s ferry terminal. Staying in a comfortable unit among tightly-packed traditional Japanese dwellings in the small fishing village of Hommura, we walked to local supermarkets, art attractions and public spaces (though cycling is also very popular). The island is home to many pampered cats which seem to be the companions of some of the local gardeners and workmen – akin perhaps to dogs on tradies’ ute trays in Australia. 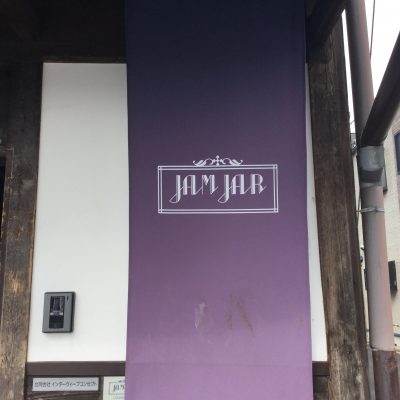 Later in vibrant Kyoto, a small apartment in the Gion-Minami Hotel in an inner-city laneway had everything for a comfortable stay. Kyoto’s modern glass-fronted structures contrast with old traditional homes and buildings, and the lively Gion district is close to the CBD, shrines, temples, markets, and many hidden-away alleys. Nearby, the Yasaka shrine is an imposing site when sunlight hits its orange-arched gateway and the Teramachi Street shopping district gives “arcade” another meaning, its huge and dazzling nature, contrasting with the nearby Lipton Teahouse (a haven for western-style coffee, tea and cake devotees). In Imakojicho, the wonderful Jam Jar cafe and two small rental apartments, are run by an ex-Melbournian, Danny Mathewson and his partner, Kazuo, a designer. Set in a restored “Machiya” townhouse (built in 1915) in Nishjin, in earlier times the area was renowned for its textile (silk) weaving factories. Danny showed us around, and served us freshly-brewed coffee, black tea (hot), custard tart and the piece de resistance, jaffles with berries, chocolate and bananas with cream.

The nearby impressive Kitano-tenmanguu Shrine and the Higashimuki-kannonji Temple are very popular with tourists, school groups and locals, and a little further afield, the picturesque grounds of the Rokuon-Ji Temple, house the  magnificent Golden Pavilion. Later in Tokyo, on the advice of a very helpful hotel concierge, we started on the Yamanote circle train line to become acquainted with this massive, impenetrable city. 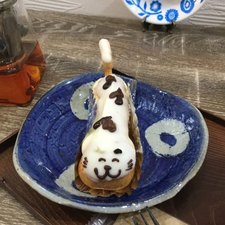 Our first stop invited a stroll around the huge Ueno Park area, checking out an avant garde gallery, walking through little winding lanes and the Yanaka Reien Cemetery (the resting place of many historical figures, famous writers, actors and artists). This escapade took several hours! Then, discovering Yuyake Dandan, a busy, thriving market in narrow alleys, and a tempting café, Nekoemon (which specialises in cakes shaped and decorated like cats), our Yamanote line introduction to Tokyo hit a snag. But there was time to visit the world’s busiest pedestrian intersection at Shibuya, where we were instantly impressed by the many buildings in various hues, sizes and degrees of architectural beauty, colourful neon signs, blaring loud-speaker music and advertising signs, amid excited milling tourists “on the starting blocks” ready to cross the road – without colliding with other people. 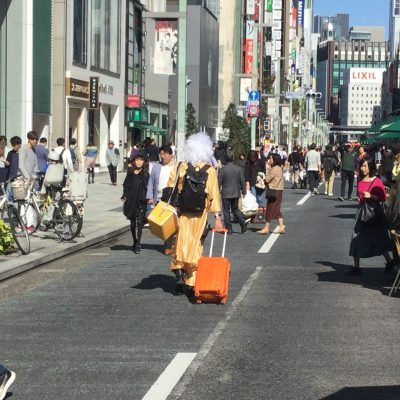 Tokyo’s Imperial Palace Gardens, the city’s iconic pink-coloured railway station, and the ridiculously-extravagant Ginza shopping district are impressive. The latter’s main streets are closed to vehicle traffic on Sundays, giving cashed-up shoppers and sticky beaks the chance to indulge in alfresco dining or people-watching around the many expensive, high-end shops. Central Chiyoda, specifically Iidabashi, is a terrific location to be based in Tokyo especially if inclined to visit some of the 180 second-hand bookshops or need a fix of (hard to find) “real” coffee – and on that score, Segafredo Zanetti Espresso in nearby Kudanshita is a must. Three weeks in Japan is not a long time! The contrast of the quiet Kyushu countryside and sedate Naoshima with larger cities such as Fukuoka, Hiroshima and Kyoto, and spectacular, Tokyo, provide wonderful insights into Japan’s varied geography and way of life. More trips to this fascinating country are warranted.