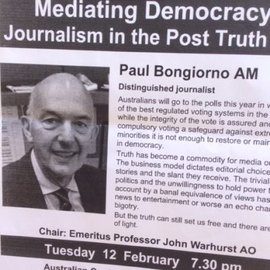 Distinguished Canberra journalist, Paul Bongiorno, recently presented his views on democracy in Australia in a lecture entitled, Mediating democracy: journalism in the post truth age. This was part of the Forum Series: Whither Democracy, chaired by Emeritus Professor, John Warhurst AO, at Christians for an Ethical Society, Barton (www.ces.org.au).  While Australia’s machinery of government and electoral processes work well says Paul, many Australians do not trust government. He cited factors that have led to electorate disenchantment: the media’s tendency to follow models where editorial choices about stories are dictated by business; “shock jocks’ ability to easily knock out” the voices of groups with different views; regular criticisms of our public broadcaster the ABC by various governments and calls to privatise it; online sites which provide politicians with myriad opportunities to bypass media scrutiny; and the capacity for politicians to present inaccurate images (think the Children Overboard issue for instance) for political advantages but which do not properly inform voters.

In quoting former prime minister, Paul Keating’s view that the parliament should be “a clearing house for contested ideas”, Paul Bongiorno described parliament nowadays as “a shambles” and emphasised journalists’ crucial role in pursuing the truth and presenting accurate information to the electorate. An example of the media providing valuable checks and balances in politics he says, is The New Daily (edited by editor/journalist, Bruce Guthrie). Also on a positive note, he cited the success of Australia’s two major parties in generally maintaining safety nets; the good works of church welfare agencies; and, the electorate’s ability “ to get it right”, shown by community opinion on the same sex marriage question. In that vein, he noted that political decisions may be best left to the “good sense” of the Australian electorate.