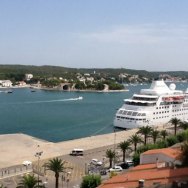 After a European holiday mostly in Paris, Berlin and Barcelona, we boarded the very comfortable 300-passenger Silversea ship at Barcelona, looking forward to seven days of Mediterranean cruising to various French, Italian and Spanish port towns, and later, having a sojourn in England, including the Lake District.

We’d meandered around enchanting European towns and villages, visited magnificent cathedrals, galleries, museums and opera houses and sampled fine fare. But a rest was in order after the ‘hardships’ of long hot queues and navigating our way around busy airports and train and metro stations.

Travel highlights included visiting Parisian art galleries, cafes and other attractions including the resting place (Pere Lachaise Cemetery) of Doors’ lead singer, Jim Morrison, actress Sarah Bernhardt and Irish writer, Oscar Wilde. The overnight train ride from Paris to Berlin was fun and we loved the starkness of Berlin (reminiscent of 1950-1960s black and white television footage) and the chance to wander around community flower and vegetable plots.

Boarding the ship, warm greetings and enthusiasm from staff set the scene for a wonderful experience on this ‘floating town’. The well-equipped spacious suites came with a television and verandah and the tariff included room-service, entertainment, films, daily bulletins about ports and excursions and many facilities. Meals to suit all sorts of tastes were available. Dinner time was always convivial as passengers from many nations and varying ages and backgrounds enjoyed fine cuisine, the sleek vessel skimming through the shimmering sea. Afternoon teas were special too as ever-attentive waiters served dainty sandwiches and sumptuous cakes while a talented pianist tapped out Cole Porter songs. 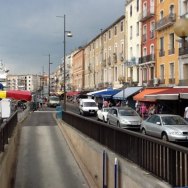 Setting sail late on a Friday afternoon, the ship headed for the French fishing village, Sete, where on a humid Saturday morning we mingled with locals, later taking shelter in a cosy seafood café during a thunderstorm. People chatting under shade in cobble-stoned squares and cafes around narrow lanes of art-deco buildings and houses ranging in colour from soft pastels to striking yellows, browns and ochre, typified similar scenes on this Mediterranean sojourn.
The cruise offered various shore excursions such as catamaran rides, walking tours, wine tasting and visiting abbeys, castles, churches, mansions and monasteries. Kayaking in Sete’s canals, driving along scenic mountain or coastal areas of  Corsica (France) from the port town, Ajaccio (Napoleon’s birthplace), sailing around the magnificent Gulf of Ajaccio, and visiting the fortified 12th Century town, Castelsardo in Italy’s Sardinia, were enjoyable.

A favourite Sardinian tour was a visit to the town of Alghero including the Nuraghe Palmavera archaeological site, the Capo Caccia Belevedere and Alghero’s Old Town, amid spectacular views of the Coral Riviera and Church of San Francesco. Excursions in Spain included: the Island of Mallorca’s capital, Palma de Mallorca visiting the 17th Century Carthusian Monastery (famous for beautiful cloisters and gardens and as a one-time home to composer, Frederic Chopin); cycling around Fornells Beach to Cala Tirant in Porto Mahon (the capital of the Island of Menorca) to Playas de Caballeria, and visiting the Lladro Factory in Valencia where some of Spain’s fabulous porcelain is made.

We loved the beaches and many attractions in Ajaccio, and Mallorca’s imposing Cathedral Mallorca (overlooking the Palma de Mallorca Harbour); the modern gallery, Musea Fundacion Juan March (in a remodelled 17th Century residence), and the city’s La Rambla—much quieter than its famous Barcelona counterpart but a welcome respite from the heat. 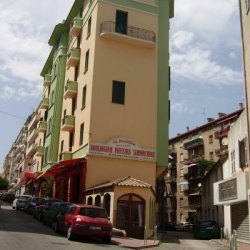 Walking for kilometres in Porto Mahon, we marvelled at the luxury yachts and enjoyed magnificent harbour views, cafes and shops and took a train ride through narrow winding streets, while in Valencia, the steep climb up the iconic Torres de Serrans (part of the medieval city gates) just had to be tackled before we set off for the nearby Gothic-architectured, St Mary’s Cathedral. One day in each port is not always enough time and the relaxed ambience and attractions of Porto Mahon and Valencia warrant a return visit.

Post cruise and with batteries recharged, another stint in bustling Barcelona was in order before heading off to England’s London, Cambridge, Manchester and Lake District.

London’s busyness, airport transit trains, taxis, railway stations, train cancellations and crowded trains all contrasted with the relaxed cruise and we arrived at cold, windy Windermere Station in pouring rain. But the joy of being in England’s wonderful lush green Lake District soon replaced reservations about being in the cold and we set about exploring local villages and familiarising ourselves with the many cafes, tea rooms, restaurants and pubs. The lush, green Cumbrian scenery and undulating hills, walking trails, daunting precipices, babbling brooks over stone bridges and grazing black-faced sheep were reminders of our schooldays’ Lakeland pencil sets and pictures from poetry books. Somehow Dorothy and William Wordsworth and Beatrix Potter never seemed far away. 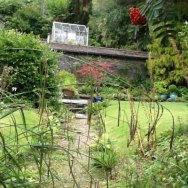 Post Lake District, a wonderful hotel in cold, wet Manchester was a haven, and rides on Manchester’s bus and exploring, were pluses. We took time off to lunch with Australian friends in Didsbury before boarding our flight to Heathrow for our home trip.