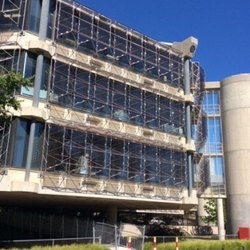 The recent Design Canberra Festival (designcanberrafestival.com.au/events/), saw renowned Australian and internationally-renowned architect, John Andrews AO, discuss many aspects of modern architecture with author-comedian, Tim Ross (from the ABC’s award-winning Streets of Your Town series). After completing a Masters in the 1950s at Harvard University, John designed various acclaimed buildings across North America, such as the CN Tower, Scarborough College at Toronto University and Gund Hall at Harvard. Hailed as the new face of Modernism, John Andres’ bold, modernist styles in Australia in the 1970s included Canberra’s Cameron and Callam Offices, the University of Canberra Student Residences, and Sydney’s American Express Tower. 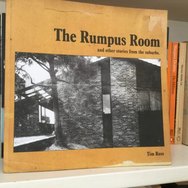 Tim Ross in his book, The Rumpus Room and other stories from the suburbs, presents a wonderful array of amusing and clever short stories which take a brutal and honest look at some of Australia’s suburbs and architectural features. According to the book’s blurb, Tim has painted “a picture of Australian domesticity and its relationship to the Australian psyche in all its funny, nostalgic, ironic and often acutely cringe-worthy glory”.  Nowadays, John laments that significant parts of the Cameron offices have been demolished. And the “Sydney convention Centre has been pulled down and replaced with one of the worst pieces of architecture”, mainly because “someone saw the opportunity to make money by building something else”.  The King George Building (formerly the American Express Building), has been changed dramatically. Tim also laments that in Australia “we don’t seem to respect the beauty of buildings and architecture”, a fate which contrasts with that of the Andrews-designed buildings in America which have stood the test of time and remain intact. Tim is a strong supporter of Canberra, describing the capital’s buildings as “very attractive” (due in some measure to John Andrews’ designs), but he also makes the point about the need for consideration about the important role of the city’s architecture.